In the spring of 1988, Brent Boyles and Dave Hollenbeck saw a ‘For Sale’ sign on a building located at 5001 West Main Street in Belleville. The two brothers-in-law decided to purchase the building and the associated typewriter business. It was their intent to convert the typewriter users to computer users, and the rest is history. 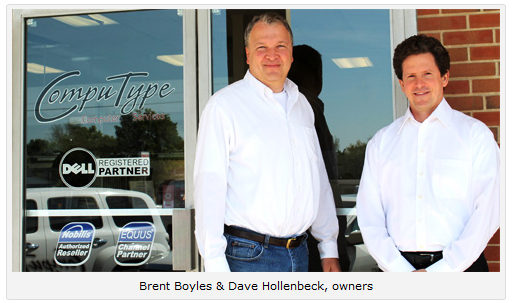 When Brent and Dave started CompuType, personal computers were still very new and weighed slightly less than a ton. Floppy disks were the size of motherboards, and it took just the right combination to boot up your PC. Dave was a programmer and Brent was a property manager. PCs played an important role in their jobs, and they knew it was only the beginning for technology. With much family support and encouragement, they decided to see if they could make a go of it and establish a computer business.

Brent and Dave were not only brought together by their love of technology but also by their love for two sisters. Brent and Dave married sisters and built on that bond to create CompuType. Many discussions, arguments, and brainstorms happened at the family dinner tables. Irv DeFrates, Brent and Dave’s father-in-law had just recently retired and offered to help them set up the backbone of the business. Brent’s father, Al Boyles, had recently retired from a long and successful teaching career at Belleville East High School and was eager to help as well. Both gentlemen pitched in with both hands and became important to the success of the business. Over the years, many family members have been employed at CompuType. Currently, Dave’s brother, Rick Hollenbeck, heads up the Video Surveillance division. Bob Moss, Brent’s uncle, is in charge of shipping and receiving. Lanna Boyles, Brent’s wife, collects copier meter reads and prepares the copier contract bill. Renee Dietz, sister-in-law to Brent and Dave, serves as the purchasing manager.

CompuType has been an important part of the community and has established many business contacts. Brent and Dave are eager to take part in community programs and offer assistance in many community organizations. CompuType is a member of the Belleville Area Chamber of Commerce.

Brent Boyles
A lifelong resident of Belleville, Brent attended High Mount Grade School and graduated from Belleville West High School. He lives in the west end of Belleville with his wife and three children. Brent has served on the YMCA board and currently serves on the Salvation Army Board, which he served as president of the board for several years.

Dave Hollenbeck
Dave is from Arnold, Missouri, but has also made the west end of Belleville his home. He resides with his wife and two children in the Signal Hill area. Dave has also been involved in many community activities and is always ready to lend a hand whenever and wherever there is work to be done.